…that it’s just meant to be

They fell into bed together even before they fell in love.

Not because they were desperate. Simply because it felt like the most natural thing in the world, you know.

They didn’t talk about how they will sit on their porch together and watch the sunset, deciding on names for their babies. They did not discuss about what sort of a house they will build, their house of dreams. He didn’t tell her how much he loved her laugh or how beautiful she looked in the morning. She didn’t appreciate how caring he is or how she loved the fact that he made her laugh.

They did not want love. That’s not what they were looking for. Love was rubbish, they both agreed. It had only brought them pain so far. Their pasts had taught them that. So they had decided, mutually, that there were no commitments from either of them. Nope. None whatsoever. They didn’t want to give a name to this. They were happy the way things were. He had never felt this way for any girl. No girl had ever turned him on the way she did, and she wasn’t even a babe. But there was something about her. She hadn’t felt this sort of dizziness around any other guy. Each time he was around, the world stopped spinning around her. It was just him and her. In many ways, they were xerox copies of each other.

She knew that this may never last. She was no fool. And definitely not an emotional fool. She knew what kind of a guy he was. He was the kind who ran in the other direction at the mere mention of love and commitment. But at that point, that’s exactly what she wanted. No commitment. No future. No “Where is this going?” No "We'll go to Mauritius on our honeymoon." No "We'll have one son and one daughter". She was aware that at a later point in life, she might regret it, but she also knew that she didn’t want to live her entire life not knowing what being passionate about someone was. She didn’t want to regret that she had the opportunity to feel that way for somebody, but had let it pass because she was afraid to take a risk. She had never been a risk-taker, but she was willing take one, just this one.

And so she did. They did. It was the first time for both of them. The very first. And it was not tender and soft or anything of that sort. It was mad, urgent, crazy. They couldn’t wait to explore each other’s bodies. It was an adventure for them.

But when it came to the actual thing, they couldn’t do it. Because it was just too painful for her. They tried and tried. But he couldn’t bear to see her in so much of pain. She didn’t want to disappoint him, so she held back her cry. But the minute he saw her tears, he stopped. I’m sorry, she said. Never mind, he said. We’ll try some other time.

So they tried again. But it refused to work out. Somehow, it just wasn’t happening. How come when they show it in movies and write about it in books, they make it out to be so easy, they asked each other. They would try for a while, and then they would just lie there, exhausted. Exhausted just out of trying. And then gradually, they started talking more. Talking about their lives, their past, their dreams, their hopes. They started sharing about each other. They spoke about how they were both afraid to commit because they had lost faith in love. They spent many afternoons, lying next to each other, wondering what this was. He was still afraid to commit, and she still didn’t know if she wanted a relationship. She even told him that if he ever decides to walk away, she will never try to hold him back, but will always think of him as the guy who had stirred never-before-felt feelings in her. She would always remember him as the guy she had almost given her virginity to.

And that’s when they stopped trying to have sex and started making love. And then it happened. Just like that. The magic happened. It didn't hurt anymore.

Maybe falling into bed together before they fell in love worked for them, in some weird, inexplicable way.

He’s still afraid of commitment. And she still considers him the biggest risk she ever took.

But they both know…
Posted by Spaceman Spiff

My blog is a foodie, just like me. It's favourite food is comments. So please do take a few minutes out to leave a comment. And please be nice! :)

I say a lot of things 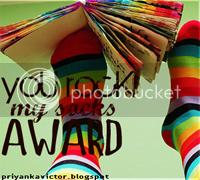 Spaceman Spiff
Self-obsessed. Spaced-out. Grammar Nazi. Ph.D in Sarcasm. Maggi-lover. Purple-freak. Champion-texter. 'Worry' is my middle name.Appreciation for my writing gives me a better high than a vodka-mango can. Dream of giving away autographed copies of my multiple-award-winning books to screaming fans who have my name tattooed on their arms. Wish to meet Ruskin Bond at least once before I die. Or before he dies. A typical Virgo if there was ever one. I don't handle criticism too well.So if you have nothing good to say about my writing, remember, I might just kill you. No pressure. Want to relocate to Utopia sometime in the future.

Winners of the Miss.Popularity Award (Yes, my blog is a girl. Du-uh!)